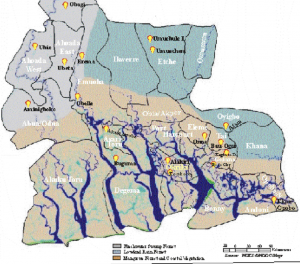 November 03: Unconfirmed initial news by local media report that as many as three persons have been killed, an unspecified number have been injured, and up to five boats hijacked in a piracy incident along the Bille waterways in Degama Local Government Area of Rivers State, Nigeria. The boat or boats were reportedly heading to Port Harcourt from Bille Jetty. The boats that were attacked are believed to be local passenger vessels.

In response, the Maritime Workers Union have threatened to shut down operations due to the piracy risk. The Chairman of the Union stated that the travellers are no longer safe travelling on the waterways, even as he called on the State Government to intervene. According to Jonah, “[…] This is something that has been happening. It has happened in Andoni, in Bonny, in Akuku/Toru, in Degema and almost everywhere, every day. So, we have already concluded that we are going to shut down on Monday. We are not going to render our services anymore,” the Maritime Union Workers Chairman said, while soliciting for the intervention of the Rivers State Government to end the incessant pirates attack on the waterways. “We have written to the Governor, but I don’t know if he has received our letter. We expect that we would invite us, so we can discuss on the way forward,” he said. He further said the gunboats which the Governor donated sometime ago is nowhere to be seen, adding, “As I speak, about ten gun boats are unserviceable, not working in the state, but they will tell you it is working, which is wrong.”