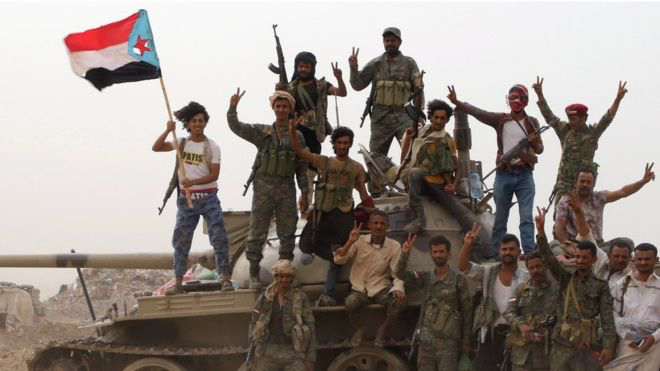 Yemeni separatists have taken effective control of the port city of Aden after days of fighting with troops loyal to the internationally backed government.

Forces aligned with the UAE-backed Southern Transitional Council (STC) – which wants an independent south – said they had seized control of military camps and the presidential palace.

The opposing Saudi-led coalition said it had responded with military action.

The government itself characterised the STC’s seizure of Aden as a “coup”.

Coalition forces had called on the STC to withdraw from their positions in Aden or face further action. It said it launched its strike against a “threat” to the country’s government.

With the STC in control of Aden on Saturday, both sides agreed to a ceasefire, which appears to be holding despite the strike.

Southern separatists have fought alongside pro-government forces for much of Yemen’s civil conflict but it has long seemed an uneasy alliance.

What’s the situation on the ground?

The southern port city of Aden has been the temporary base of President Abdrabbuh Mansour Hadi’s government. The president himself is based in the Saudi capital Riyadh.

An official with the separatist Security Belt militia told AFP that it seized the presidential palace on Saturday without a fight.

“Two hundred soldiers from the Presidential Guard were given safe passage out of the palace,” the official said.

A civil war within a civil war

Erstwhile allies, the separatists and forces loyal to President Abd-Rabbuh Mansour Hadi are now engaged in a showdown that could see the Saudi-led coalition fragment and create a new civil war within the civil war in Yemen.

The fracture within the coalition may deepen – as divisions between its two major players, Saudi Arabia and the UAE, are exposed.

The Emiratis have nurtured the Southern Transitional Council as a key force within the coalition, while the Saudis have stuck with President Abd-Rabbuh Mansour Hadi, who still spends most of his time in exile in Riyadh.

Privately, the UAE and the forces it supports do not think he’s up to the job.

The separatists believe that Islamist forces within the coalition have been strengthened and emboldened by the Saudis and could take over the south, even permitting al-Qaeda to make a comeback there.

That’s their rationale for acting now – as they maintain that whatever the outcome of the conflict against the Houthis, which is currently all but stalemated, Yemen can’t be put back together as a unified country.

“It is all over, the [Southern Transitional Council] forces are in control of all the military camps,” an official in Mr Hadi’s government told Reuters news agency.

The foreign ministry described the takeover as “a coup against institutions of the internationally recognised government”.

The UAE, which has armed and trained thousands of southern separatist fighters, earlier called for calm and a renewed focus on battling the Iran-aligned Houthis, who took over the capital Sanaa in 2014.

What has the cost of conflict been?

Doctors Without Borders on Saturday described Aden as “a battlefield” and said its hospital there was “stretched to the limit”. It said it treated 119 patients in less than 24 hours amid the fighting.

The United Nations said as many as 40 people have been killed since 8 August, with 260 injured.

Yemeni security officials told AP news agency that number was higher, saying there had been more than 70 deaths.

The civil war in Yemen has devastated the country, killing thousands of civilians and causing shortages of food and medical care that have affected millions.

After eight years of conflict, Yemen is frequently referred to the world’s worst man-made humanitarian disaster.

There have been at least 7,200 civilian casualties since 2015 – but other groups estimate the true number is much higher.

Children are especially vulnerable: the UN humanitarian office says that 7,508 children had been killed or maimed since 2013.

A large majority of the population need humanitarian aid to survive, with most unable to secure their own food, and millions, the UN says, “just a step away from famine”.