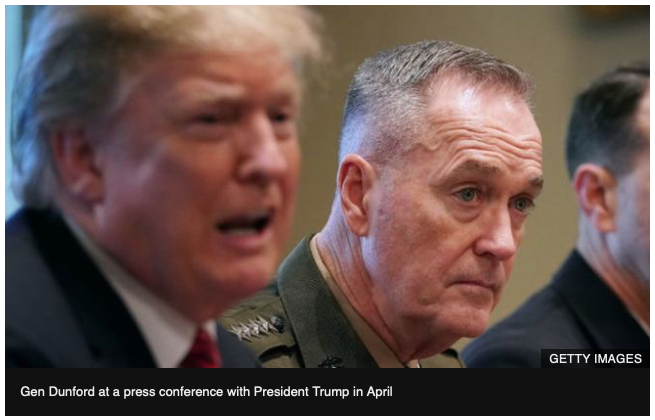 The US says it wants to create an international military coalition to safeguard waters around Iran and Yemen.

Marine Gen Joseph Dunford, chairman of the US Joint Chiefs of Staff, said he wanted to “ensure freedom of navigation” in the region, which provides essential trade routes.

The US has blamed Iran for attacks on oil tankers in May and June.

Gen Dunford said the US was talking to a number of countries with the “political will” to support the plans.

The US would provide “command and control” ships, leading surveillance efforts, he said. However, the aim would be for other countries to offer boats to establish patrols nearby, and escort commercial ships carrying their flags through the area.

Gen Dunford said the US would “work directly with the militaries to identify the specific capabilities” each country has to support the initiative.

The Straits of Hormuz and Bab al-Mandab are essential strategic marine locations, providing access from the ocean into the Gulf and the Red Sea.

“With a small number of contributors, we can have a small mission,” he said. “We’ll expand that as the number of nations that are willing to participate identify themselves.”

Everyday, nearly four million barrels of oil pass through Bab-al Mandab to the rest of the world.

Why is the US so concerned about shipping?

Last month the US blamed Iran for attacks on two tankers in the Gulf of Oman – accusations denied by Iran. It followed an attack on four tankers in the region in May.

Days after the June attacks, an unmanned US drone was shot down by Iranian forces in the Gulf.

Iran said it had violated Iranian airspace and would send a “clear message to America”. The US insisted the drone had been over international waters. President Donald Trump tweeted: “Iran made a very big mistake!”

The US planned for retaliatory air strikes, which were later cancelled.

Iran has said it would close the Strait of Hormuz if, as President Trump hopes, it becomes unable to export oil due to sanctions the US imposed since pulling out of the Iran nuclear deal.

However, speaking to the BBC, Iran’s ambassador to the UN remained defiant.

“We have managed under different situations worse than we have today, and I am sure we can manage again,” Majid Takht-Ravanchi said.

He also accused Europe of failing to honour their commitments under the 2015 deal.

May 2018: US President Donald Trump withdraws unilaterally from the 2015 nuclear deal between Iran and six world powers, and begins reinstating sanctions to force Iran to renegotiate the accord. Iran’s economy slumps as they take effect.

2 May 2019: Mr Trump steps up pressure on Tehran by ending exemptions from secondary sanctions for countries still buying Iranian oil.

5 May: The US sends an aircraft carrier strike group and B-52 bombers to the Gulf because of “troubling and escalatory indications” related to Iran.

8 May: Iranian President Hassan Rouhani says Iran will scale back its commitments under the nuclear deal in retaliation for the sanctions, including by allowing its stockpile of low-enriched uranium to increase. Enriched uranium is used to make reactor fuel and potentially nuclear weapons.

12 May: Four oil tankers are damaged by explosions off the UAE coast in the Gulf of Oman. The UAE says the blasts were caused by limpet mines planted by a “state actor”. The US blames Iran, but it denies the allegation.

17 June: Iran says it will breach the limit on its stockpile of enriched uranium set under the nuclear deal on 27 June, unless Europe protects Iranian oil sales.

20 June: Iranian forces shoot down US military drone over the Strait of Hormuz.