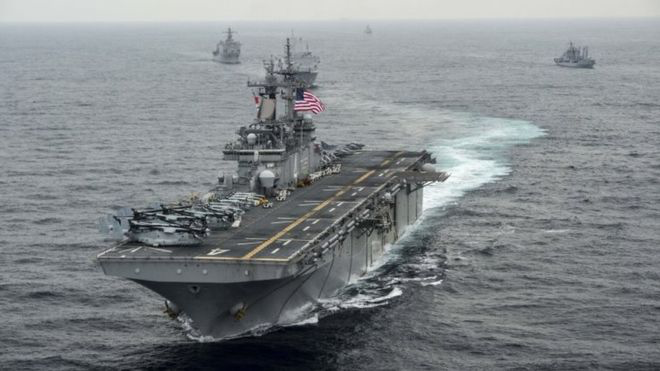 President Donald Trump has said the US Navy destroyed an Iranian drone in the Strait of Hormuz.

He said the USS Boxer amphibious assault ship “took defensive action” on Thursday after the drone came within about 1,000 yards (914m) of the vessel.

Iran said it had no information about losing a drone. In June, Iran downed a US military drone in the area.

Earlier, Tehran said it had seized a “foreign tanker” and its 12 crew on Sunday for smuggling fuel in the Gulf.

Iran has been blamed by the US for attacks on tankers since May in the world’s key shipping area. Tehran denies all the accusations.

The recent incidents have triggered fears of a military conflict in the region.

What have the US and Iran said about the incident?

Speaking at the White House, Mr Trump said: “I want to apprise everyone of an incident in the Strait of Hormuz today involving USS Boxer, a navy amphibious assault ship.

“The Boxer took defensive action against an Iranian drone which had closed into a very, very near distance, approximately 1,000 yards, ignoring multiple calls to stand down and was threatening the safety of the ship and the ship’s crew. The drone was immediately destroyed.

“This is the latest of many provocative and hostile actions by Iran against vessels operating in international waters. The United States reserves the right to defend our personnel, facilities and interests.”

A defence department official quoted by the New York Times said the drone had been brought down using electronic jamming equipment.

Meanwhile, a senior Iranian official dismissed the US statement. In an English tweet posted on 19 July, Deputy Foreign Minister Abbas Araqchi even suggested the US may have downed its own drone by mistake.

Mr Araqchi’s comment came after Iranian Foreign Minister Mohammad Javad Zarif told reporters in New York on Thursday that “we have no information about losing a drone today”.

What about the seized oil tanker?

Iran’s state media quoted the Guards as saying the vessel had been smuggling one million litres (220,000 gallons) of fuel.

The vessel was seized south of Iran’s Larak Island, Iran said. Washington called on Iran to immediately release the ship.

What’s the background to this?

Tensions have been high in the Gulf since the US tightened the sanctions that it reimposed on Iran’s oil sector after unilaterally withdrawing from a landmark 2015 nuclear deal.

The US has blamed Iran for two separate attacks on oil tankers in the Gulf of Oman in May and June – an allegation Tehran has denied.

Iran also shot down a US surveillance drone over the Strait of Hormuz. Tehran said the aircraft had violated Iranian airspace, and that the incident sent a “clear message to America”.

The US military said the drone had been over international waters at the time, and condemned what it called an “unprovoked attack”.

UK warships have meanwhile been shadowing British oil tankers in the area since Iran threatened to seize one in response to the impounding of an Iranian tanker off Gibraltar.

The UK said the tanker was suspected of breaching EU sanctions against Syria. Iran denied it was en route there.

US Central Command Chief General Kenneth McKenzie, speaking on a visit to Saudi Arabia on Thursday, said he was working “aggressively” to find a solution to free passage for ships through the Gulf region, Reuters news agency reports.