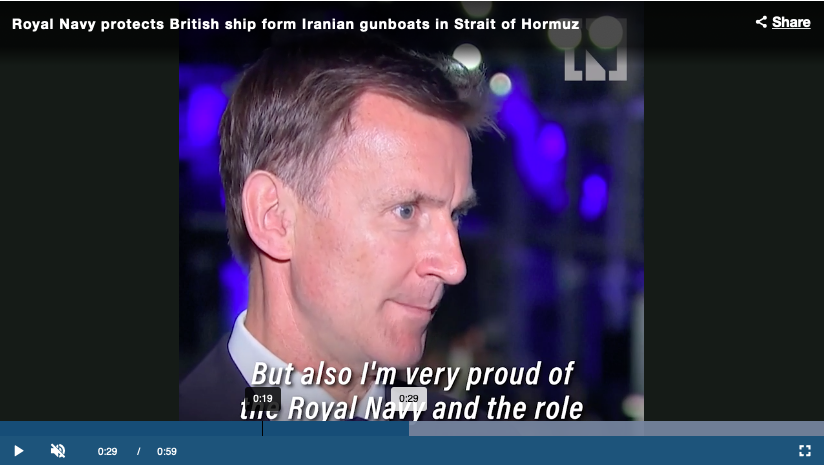 Britain has increased its military commitment in the Arabian Gulf by sending a second warship to the region as it seeks to offer reassurance to merchant shipping amid escalating tensions with Iran.

HMS Duncan, a Type-45 destroyer, has been ordered to sail to the Arabian Gulf after recently completing Nato exercises in the Black Sea. The journey is expected to take about 10 days. The ship will join the frigate HMS Montrose and US allies in the Gulf, but will not be part of an international naval coalition requested by America. It was understood to be bound for the area, but its arrival has been brought forward.

The UK government said on Thursday that three Iranian vessels tried to block a British-owned tanker passing through the Strait of Hormuz, but backed off when confronted by HMS Montrose. Iran denied the claims, saying that if it had received orders to seize any vessels it would have executed them straight away.

The confrontation came after the British navy’s seizure of the Iranian supertanker Grace 1 off the coast of Gibraltar on June 4.

The vessel was carrying 2.1 million barrels of crude oil suspected to be bound for Syria in a breach of EU sanctions. Its four crew members were arrested and released on bail by authorities in the British territory.

The seizure sparked fury in Tehran, which branded the act “illegal”. Calling for the vessel’s release.

Joel Gulhane, a Middle East analyst at The Risk Advisory Group, told The National that Iran “will probably be more willing to harass tankers as long as Grace 1 remains in detention”.

“This fits within Iran’s wider rhetoric and actions in response to the escalating tension over the past few months amid US sanctions that also aim to reduce Iranian oil exports to zero.”

The US last year pulled out of a 2015 accord that lifted sanctions on Iran in exchange for curbs on its nuclear programme, but Tehran blames other western signatories, including Britain, for not doing enough to counter these sanctions despite remaining committed to the deal. Tensions have also been raised by the US sending additional military assets to the region and a series of attacks on tankers in the Gulf of Oman that Washington has blamed on Iran.

Britain’s senior defence adviser for the Middle East has said its priority is finding a diplomatic solution to the crisis.

“The UK has been clear that a diplomatic solution remains the key focus of our efforts and we call on all actors to de-escalate current tensions,” Lt Gen Sir John Lorimer said. “In targeting civilian shipping, international norms have been violated. It is essential that trade is able to pass safely through international waters in this region and we are working closely with our partners to restore maritime security in the Gulf,” he told state news agency Wam.

He said the UK’s deployments in the region “are pre-planned and are not a direct response” to the existing tensions.

“Our continued military presence demonstrates this intent. We have over 1,500 personnel permanently stationed in the region, along with several Royal Navy ships and some of the most advanced military aircraft.” Speaking soon after Iran breached the limit on its stockpile of low-enriched uranium under the nuclear accord, Lt Gen Lorimer said Tehran’s commitment to the deal was under scrutiny.

“We have been consistent and clear that our commitment to the nuclear deal depends on full compliance by Iran,” he said. “We regret this decision by them, which calls into question an essential instrument of nuclear non-proliferation.” Gen Lorimer, who visited the UAE for the third time this year late last month, praised the country’s Armed Forces as “one of the most experienced and capable militaries in the region”.

Sidarth Kaushal, a naval research fellow at the Royal United Services Institute, told The National that Britain’s decision to send a Type-45 destroyer instead of a less-powerful frigate sends a symbolic message to Iran.

“The theatre air-defence capabilities of the Type 45, which can intercept cruise missiles over a wide area, can also provide defence against Iranian weapons such as the Chinese-made C-802 anti-ship cruise missile if a crisis did become kinetic,” he said.

Mr Kaushal said the Type 45 augments the defences of the region in a way a frigate cannot.

“The primary aim of the Iranian strategy in the Gulf is exposing target states to disruption and instability, as opposed to doing serious physical damage,” he said.

Mr Kaushal said that by merely attempting harassment of the British vessel, Iran had engineered oil market uncertainty and an increase in prices.

“As long as Iran’s actions can introduce uncertainty to energy markets or drive up shipping insurance rates, they serve their primary strategic aim – reminding oil-consuming countries in Europe and elsewhere that they too stand to lose from the economic pressure that the White House is placing on Iran.”