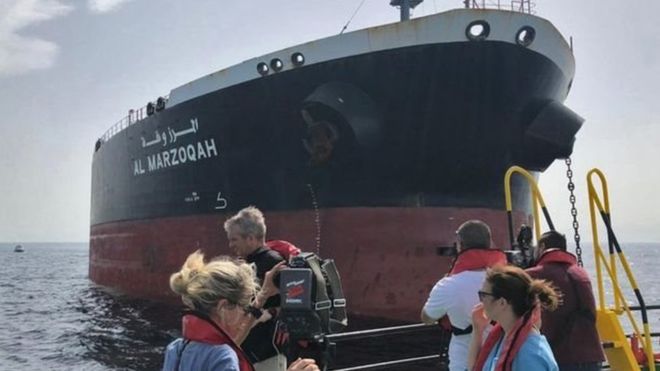 A UK Royal Navy-linked maritime safety group has issued a warning amid reports of explosions involving two tankers in the Gulf of Oman.

UK Maritime Trade Operations (UKMTO) said it was investigating the reports after regional media said the tankers had sent out distress warnings.

On 12 May, four tankers were attacked off the United Arab Emirates coast. The UAE blamed an unnamed “state actor”.

Iran denied US accusations it was behind those attacks.

They increased long-standing tensions between Iran and the US and its allies in the Gulf.

The naval reserve-manned UKMTO, which co-ordinates information from Dubai, has urged “extreme caution” and said it was investigating the latest incident.

Reports of the explosions are yet to be confirmed by any oil tanker firms or regional governments.

The US under President Donald Trump has taken a hard line towards Iran, accusing it of being a destabilising force in the Middle East.

It has sent warships and bombers to the region this year in response to what it said was an unspecified plan by Iran to attack US forces in the area.

Iran has rejected the claims and has accused the US of aggressive behaviour.