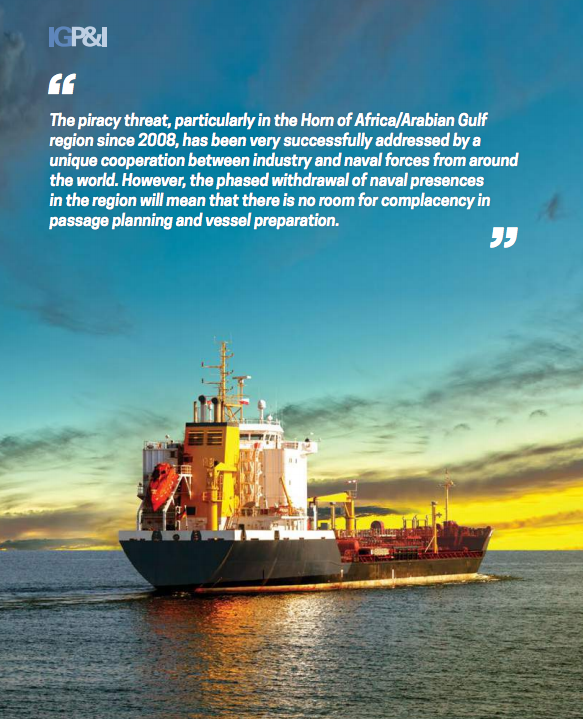 Following the very significant spike in piracy activity between 2008 and 2013, particularly in the Horn of Africa/Arabian Gulf region, the slowdown in hi-jacking and piracy incidents in all regions has continued. This is good news both for shipowners and for their marine insurers. A variety of factors have contributed to the downturn in attacks since around 2013, not least improved diligence by shipowners in preparing their vessels and crews for trading in piracy-prone regions, and the continuing use of armed guards on board many vessels. A further major factor in the Horn of Africa/Arabian Golf/Gulf of Aden region has undoubtedly been the significant deterrent of the coordinated naval forces under the EUNAVFOR/ Operation Atalanta initiatives launched at the end of 2008. However, the mandate of the operations will cease at the end of December 2018, and a phased reduction in the naval presence in the region has been in progress for some time. The hijacking of the tanker Aris 13 off the coast of Somalia in March 2017 was the first such incident involving a commercial vessel in the area since 2012. Fortunately, the situation was resolved following the intervention of local naval forces, but this incident does raise the question of whether a declining naval presence will embolden pirates and reverse the trend of the past four years of declining levels of piracy activity in the region. Although cover for ransoms is not included in the protection enjoyed by Members of the Group clubs as of right, it is nonetheless the case that any third party liabilities arising out of piracy incidents, including crew claims, property or cargo loss or damage, and environmental damage, are all included in club cover, with the result that clubs are directly impacted by levels of piracy activity, wherever this occurs around the globe. The Group has worked, and continues to work, closely with other industry associations and the naval and military sectors in developing and updating. Best Management Practices for shipowners operating in piracy-prone areas and providing advice and assistance to shipowner members on piracy-related coverage issues. The Group will continue to monitor developments closely over the coming year, both in relation to the prospect of a declining naval presence in the Horn of Africa/Arabian Golf/ Gulf of Aden region, and in relation to the need to improve awareness and counter measures in respect of piracy in other regions, promoting a practical and unified approach amongst industry associations, and keeping its shipowner Members advised as usual.