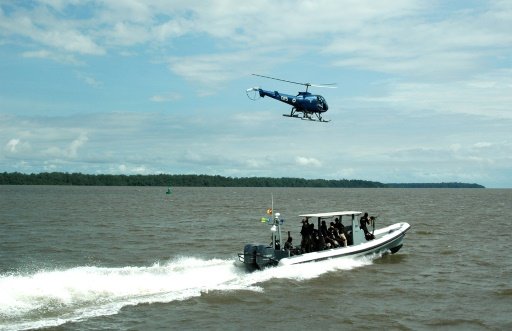 A total of 19 African countries on Thursday launched an EU-funded network to tackle piracy, high seas robbery, kidnappings and human trafficking in the strategically important Gulf of Guinea.

The Gulf of Guinea interregional network (GOGIN) officially began operations after a ceremony in the Cameroon capital Yaounde.

“Nineteen African coastal nations, from Angola to Senegal, have begun working together to combat criminality at sea,” said an official statement from the group.

The 9.2-million-euro ($9.8-million) four-year initiative is designed to clamp down on maritime crime in a region where trafficking in both human beings and drugs is rife.

Adding to a raft of problems to solve in a zone stretching across some 6,000 kilometres (3,750 miles) are illegal fishing and oil theft.

Heading the GOGIN taskforce is retired French vice-admiral Jean-Pierre Labonne, who said the agreement followed “several months of fine-tuning with my African colleagues.

“Our long-term aim is to support peace, stability and economic and human development throughout West and Central Africa,” said Labonne, who vowed to spare no effort to ensure the project achieves tangible results.

He added that GOGIN would provide participating states with technical and logistical assistance to fight crime and to better exchange information among themselves.

The African states will also benefit from academic training modules and training exercises at sea with the goal of eventually overseeing such activities themselves.

The project will be implemented by Expertise France, a French international cooperation agency specialising in technology.

GOGIN has emerged from the Yaounde Process, a code of conduct adopted in 2013 following a regional summit on how to tackle illegal maritime activities in west and central Africa.

The GOGIN initiative adds to existing operations, including an interregional coordination centre in Yaounde to monitor the Gulf of Guinea, whose strategic position is bolstered by an abundance of natural resources.