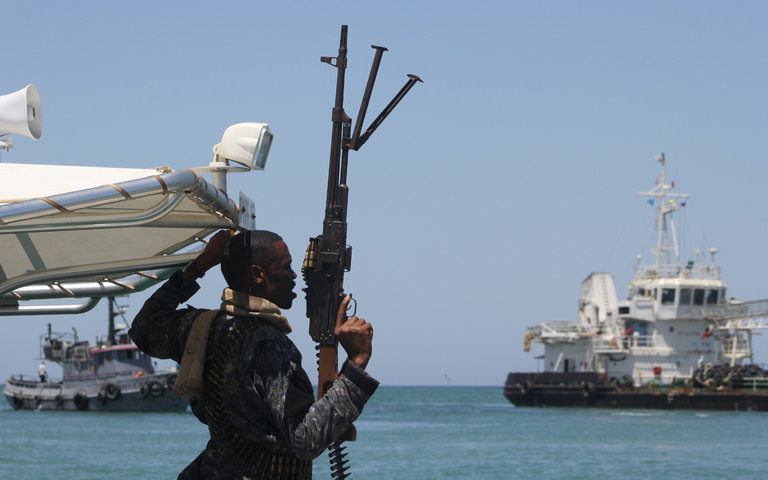 For the second time in recent weeks, Indian navy ships on patrol in the Gulf of Aden responded to distress calls from merchant vessels that fear they have come under pirate attacks. The most recent incident saw INS Sharda, a patrol vessel, steaming some 30 nautical miles and deploying its attack helicopter to ward off a raid on the Liberian-registered bulk carrier MV Lord Mountbatten. Not only did the incident testify to a revival of pirate activity in the waters off North Africa, it confirmed that the corsairs were resorting to their tactics of using dhows as mother-ships to a series of skiffs that pose as fishing boats before striking.

The teams launched from INS Sharda searched the dhows and five skiffs (three had fled as the Indian warship approached), but since no evidence of fishing was found, a malicious intent was confirmed.

The seizure of an assault rifle and ammunition from one of the mother-vessels proves that persons with mischievous intentions are “back in business”, and that it is time international shipping reverts to the intensive policing effort that had subdued the once-notorious Somali pirates.

The Indian Navy has been conducting anti-piracy duties since 2008, has “intervened” 41 times, apprehending 120 pirates and rescuing 74 fishermen who had been taken hostage.

Perhaps more importantly, it has escorted 3,749 ships through those troubled waters. Since the beneficiaries have been vessels flying the flags of various nations, the Navy’s has been a solid, if silent, diplomatic effort that does not appear to have been fully “leveraged” by those prosecuting Indian foreign policy. Even domestically the Navy’s role has been only marginally recognised, focused as Indian military thinking has customarily been on the Pakistan border, and to a lesser extent on the disputed boundary with China. Though the Navy’s “war record” is modest, its diplomatic contribution has been immense. And that is despite its personnel, certainly those having to tackle piracy, having to operate under constraints. No comprehensive policy on countering piracy has been formulated, the commanding officers of ships on patrol have often to take quick, independent decisions. There is clandestine activity aplenty off the Indian coastline too: and though on paper there exists a three-tier security plan involving the Navy, Coast Guard and local police, the marine wings of the police forces are neglected. The “gaps” are there to be exploited – not just by terrorists as they did when wreaking havoc in the financial capital but also in what are euphemistically written-off as “petty crime”. There was a period when the pressure mounted on Somali pirates caused them to “look East”, even as far as Lakshadweep. Boosting the maritime defences at all levels is a national imperative: South Block, alas, remains fixated on the “northern front”.